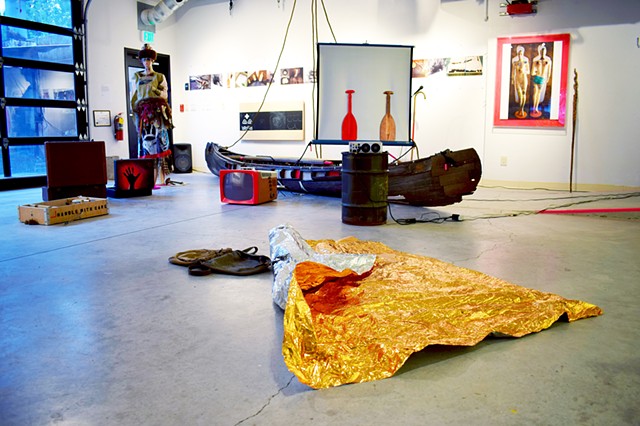 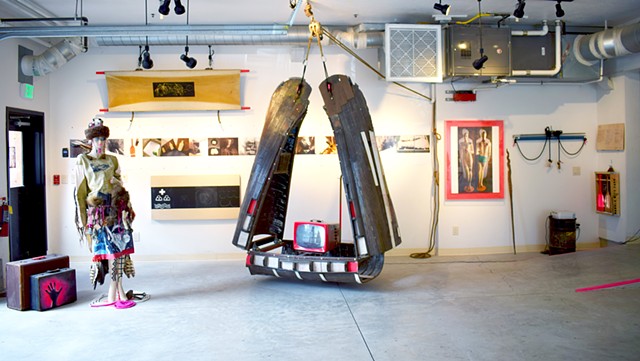 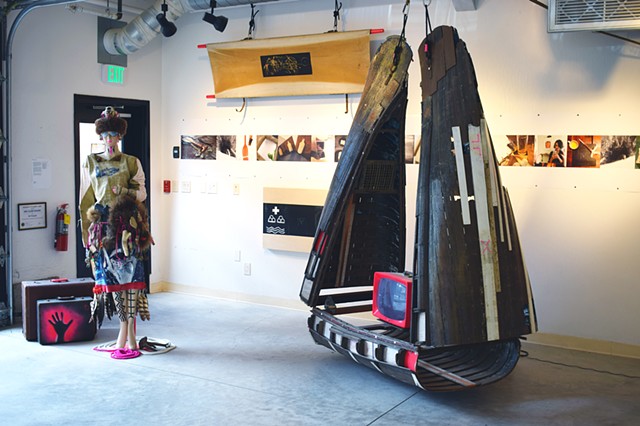 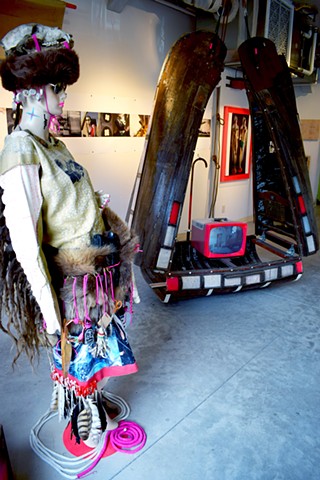 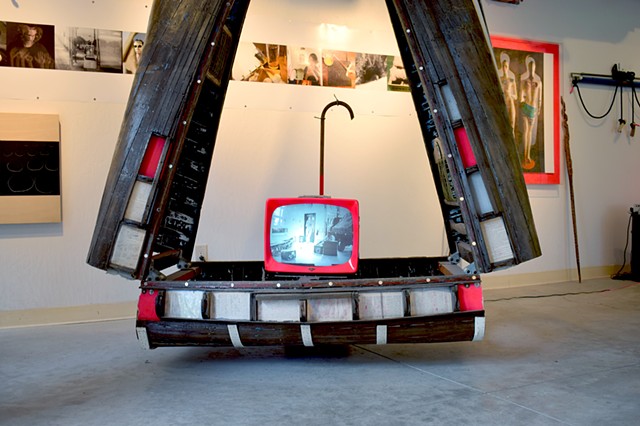 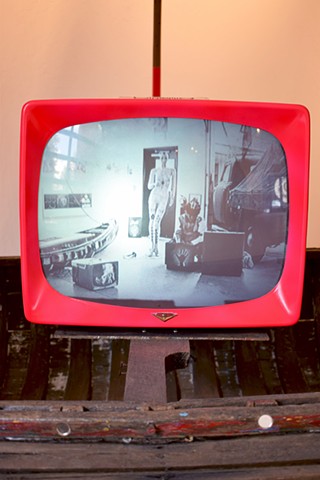 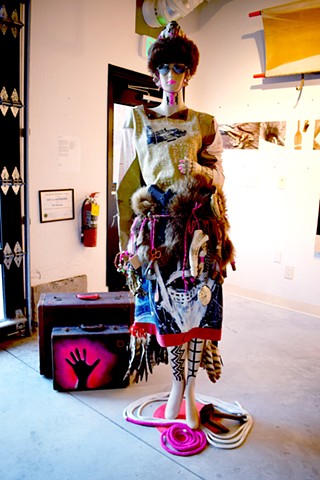 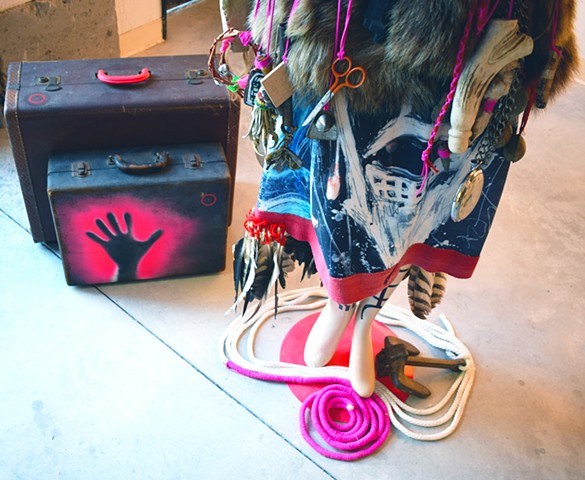 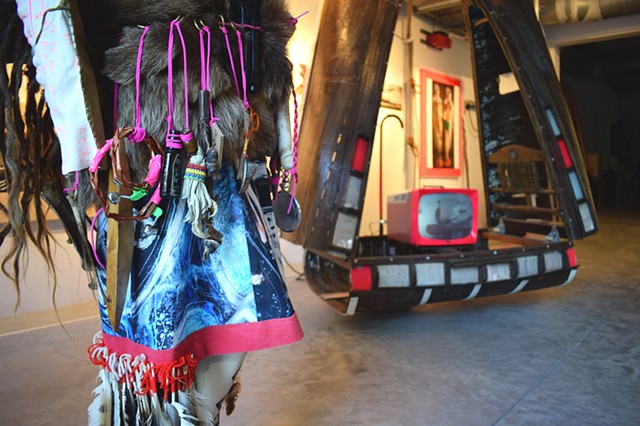 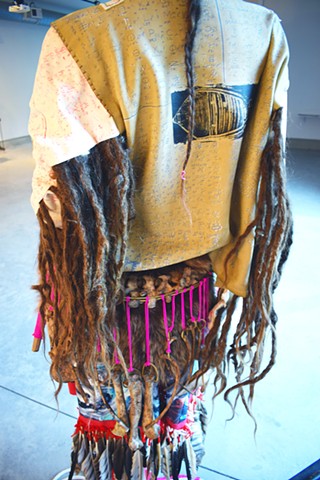 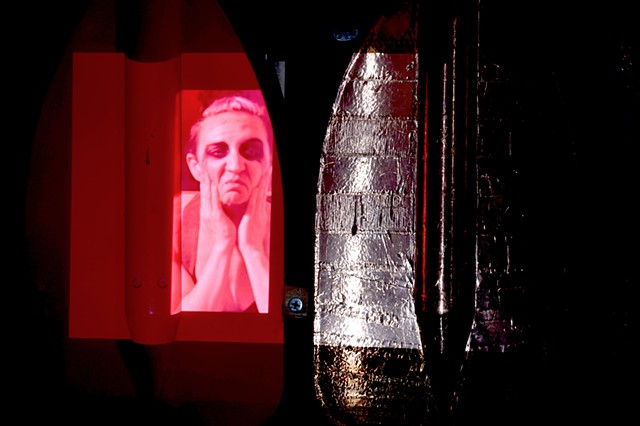 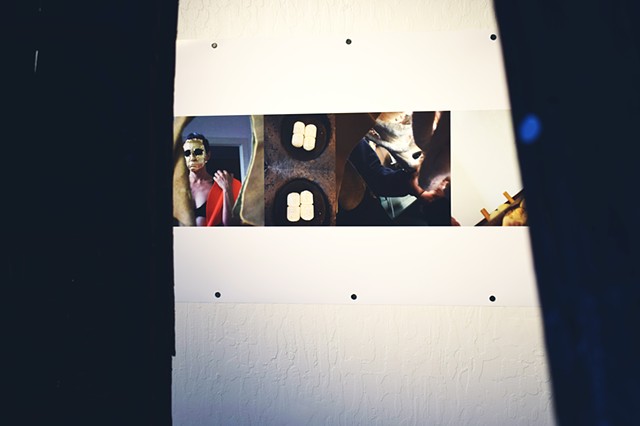 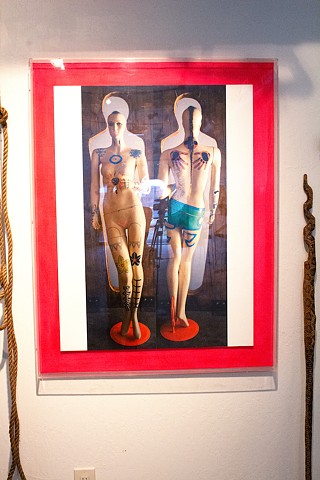 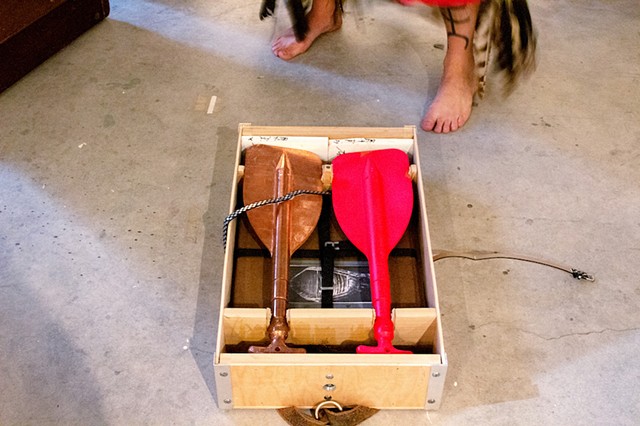 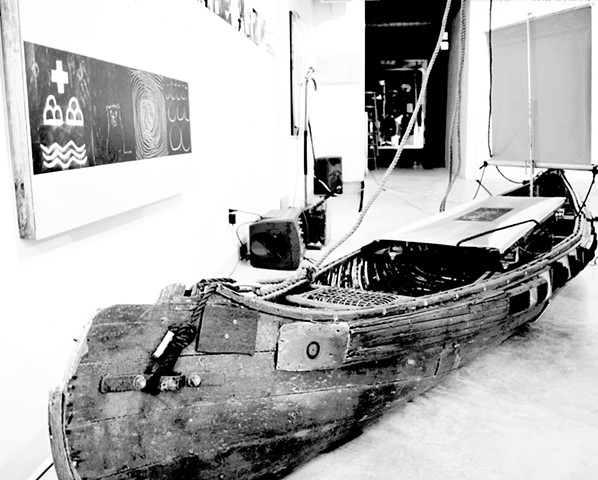 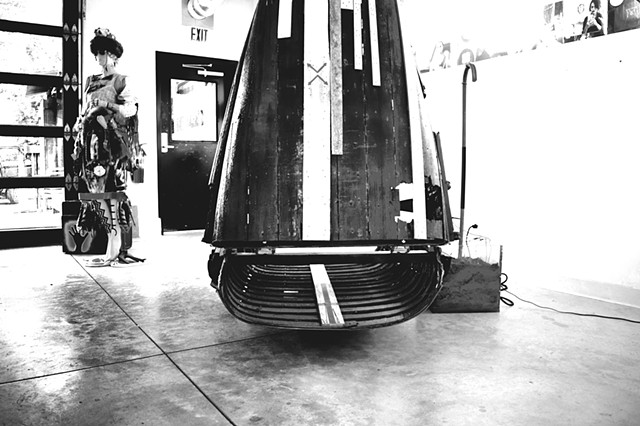 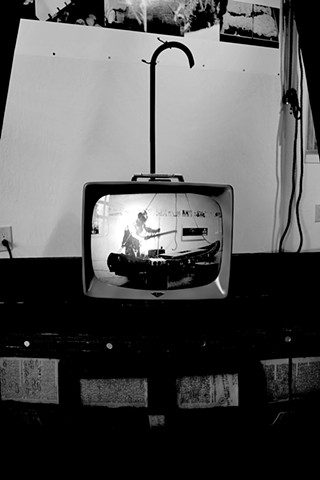 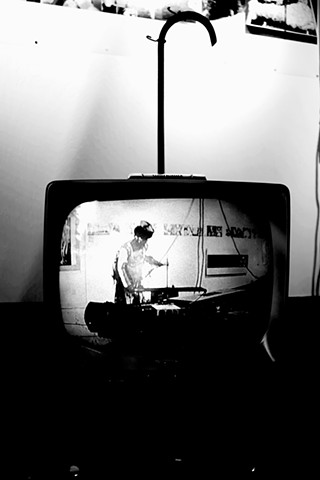 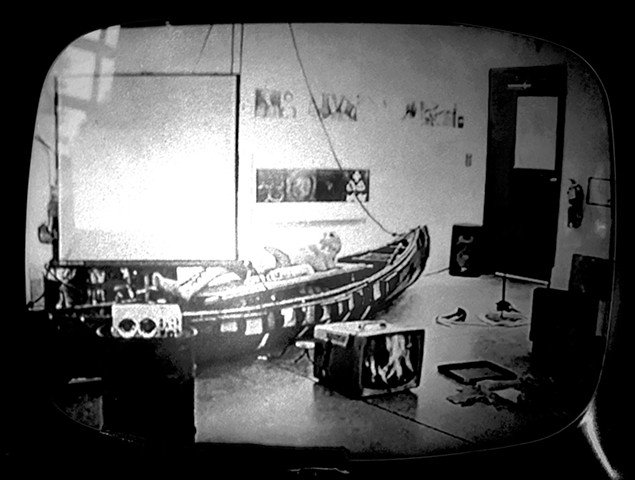 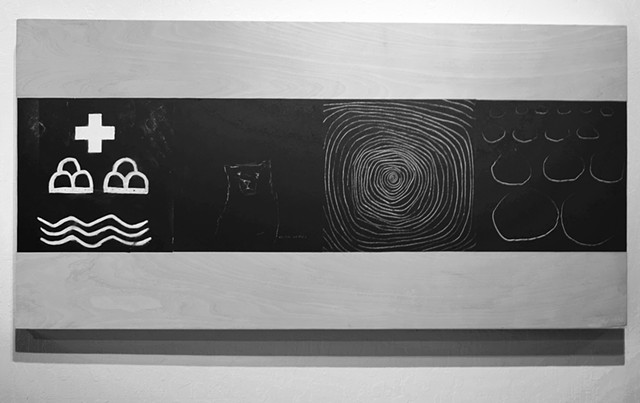 a multidisciplinary installation/participatory activation titled echo locator, which is a ritual iteration of resonator: a collaborative and experimental piece that travelled to various artists and locals within the United States from March to July 2017.

The work is directly situated within the historical context and lineage of art and artist as shamaness/shaman/healer/facilitator/visionary; questioning the role of art and artist in our contemporary realities to blur, change and define across borders of politics, identity, gender, violence, economics and environment - to clearly see and better understand where we and others are positioned within the rapidly changing landscapes of the aforementioned dimensions, thru the use of a form of art/artist as echo location, enabling us, in the end, to know where we are headed.

Melanie Alves – Her recent body work focuses on current social and cultural issues, such as gun violence and the culture of fear. She addresses the loss of societies core human values, focusing on the dynamics of power, greed, the individual and deception. She translates this loss into the powerful imagery of the toy gun (the “playful” or distorted appropriation of an object of violence) into a thing of beauty and pride in the form of taxidermy; society’s trophy to itself. Alves also explores the relation between animal instinct and our deepest inner self, viewed per the artist as our essence. Alves is influenced by the interaction of installation art, the motion of video art and the marginality of street art. Since moving to San Francisco from London UK 2011, Melanie Alves has focused entirely on her art practice, participating in various shows: including wonderland sf, 111 Minna Gallery, Spoke Art and Modern Eden.

Sherwin Bitsui, a Diné poet and artist of the Todich’ii’nii (Bitter Water Clan), born for the Tl’‘zilani (Many Goats Clan) from the Navajo Reservation in White Cone, Arizona. His first book of poems was Shapeshift (University of Arizona Press 2003) and his second, Flood Song (Copper Canyon Press 2009) received a 2010 PEN Open Book Award and an American Book Award. Other honours include a Truman Capote Creative Writing Fellowship, an Individual Poet Grant from the Witter Bynner Foundation for Poetry, a Lannan Residency Fellowship, a 2006 Whiting Writers’ Award, and a 2008 Tucson MOCA Local Genius Award. His poems have appeared in American Poet, The Iowa Review, Lit, Narrative, and were anthologized in Legitimate Dangers: American Poets of the New Century. Bitsui holds a BA from University of Arizona and an AFA in Creative Writing from the Institute of American Indian Arts. He currently lives in Albuquerque. Darcie Book (Baltimore, MD) is a painter and installation artist whose work explores paint as object and architecture through the use of innovative processes centered on the unique properties of latex paint. She was selected as a finalist for the 2016 Sondheim Prize with a corresponding exhibition at the Baltimore Museum of Art. In 2017, Book received an Individual Grant for achievement in the arts and humanities from the Belle Foundation for Cultural Development. She attended the Vermont Studio Center Artist Residency in 2015. Her exhibitions have been reviewed in Sculpture Magazine, the Baltimore Sun, Baltimore Magazine, and the Baltimore City Paper. Book is a founding member of A.M. Art Collective (est. 2011). She received her BFA in Painting from the Maryland Institute College of Art in 2004.

Jean Brennan is an interdisciplinary artist interested in site-specific opportunities for experiential learning and being in place. Her mediums are video, sculpture, and performance. Jean collaborates with the nonhuman—plants, animals, atmospheric forces, as well as remote cameras—to upend the human centered gaze and explore a kind of somatic ecology. She is a founding member of Collective Settlement, a gathering of friends making movement-based art. Her work has been shown in New York, Amsterdam, and the Hudson Valley. In 2014, she was a jury-selected resident at The New Museum. She is a professor in the Graduate MFA Communications Design Department at Pratt Institute. With her students, she investigates making as a form of research, participatory platforms, and horizontal structures for learning and collaboration.

Annie Farrar was born in Wheeling, West Virginia and grew up in Pittsburgh, Pennsylvania and Nashville, Tennessee. She earned her BFA in Painting from the Maryland Institute College of Art and her MA in Museum Studies from George Washington University. Annie is a Baltimore artist whose process-oriented work is a meditation on decay and renewal. She is a Hambidge and Virginia Center for the Creative Arts Fellow who has exhibited internationally and has work in private collections throughout the east coast and southern United States. Annie is the registrar for outgoing loans at the Hirshhorn Museum and Sculpture Garden.

Sarah Lillegard is an interdisciplinary artist living and working in Reno, Nevada. She received her Bachelor of Arts from Walla Walla University and is currently an MFA candidate at Sierra Nevada College. Lillegard has participated in artist residencies in Utah, Nevada and Michigan and received the Nevada Arts Council Artist Fellowship in 2015. Her recent exhibitions include a group exhibit at the Nevada Museum of Art and a forthcoming solo exhibit at Sierra Arts. Lillegard's work explores the expectations of a landscape, focusing specifically on the history and aesthetics of the Great Basin.

Michelle Lassaline is an interdisciplinary artist (painting, sculpture, performance art.) Hailing from the high desert of Northern Nevada, Lassaline graduated with a Bachelor of Fine Arts degree from the University of Nevada, Reno in 2014. She currently lives and works as an artist and sewist in the Pacific Northwest. Though her work varies in medium from watercolor to papier-mache to interactive performances, it can generally be characterized by its fine craftsmanship and reverence for nature.

Layli Long Soldier holds a BFA in creative writing from the Institute of American Indian Arts and an MFA from Bard College. Her poems have appeared in The American Poet, The American Reader, The Kenyon Review Online, American Indian Journal of Culture and Research, PEN America, The Brooklyn Rail, Eleven Eleven and Mud City, among others. She is a recipient of the NACF National Artist Fellowship, a Lannan Fellowship and the Whiting Award. She is the author of Chromosomory (Q Ave Press, 2010) and WHEREAS (Graywolf Press, 2017). She resides in Santa Fe, NM.

Rick Parsons, whose current work explores automatic writing, jazz thinking and three- dimensional form while addressing the environment, utilizes an interdisciplinary practice rooted in sculptural form to probe concepts of time, change, and the unknown. His sculptures and installation work have been exhibited throughout the country and has served as Sculpture Program Coordinator at Anderson Ranch Arts Center, taught at both the University of Dallas and Colorado Mountain College, been a visiting artist at University of Tennessee-Knoxville, University of North Carolina-Asheville, San Jose State University, Colorado College, University of Miami, and Arizona State University. Parsons’ sculpture was the focus of an article in Sculpture Magazine, and was published in the book Confrontational Ceramics: The Artist as Social Critic by Judith S. Schwartz, as well as being featured in the documentary film "Questions of Art" by Zach Jankovic. He holds a BFA from Stephen F. Austin State University and an MFA in Sculptural Ceramics from the University of Dallas.

Kelly Wallis is a project-based artist and graphic designer. She thrives on connecting to peers through their personal narratives, experiences and adventures, and often pairs meetings or gatherings with exercise. She explores the condition of the psyche by taking note of the emotional and physical transformations during these outings. These revelations drive and influence her process. She holds an MFA / Interdisciplinary Arts from Sierra Nevada College.